All too soon it was time to clean up the breakfast things. Priscilla took over the dishwashing, Dorothy volunteering to dry. Beverly swept the floor and Miss Esther put away the leftover food.

“Thank you so much for your help!” Miss Esther added a log to the fire in the stove as she spoke. “The kitchen doesn’t usually get cleaned this quickly!”

“A pleasure!” Beverly tucked the broom back in its place. 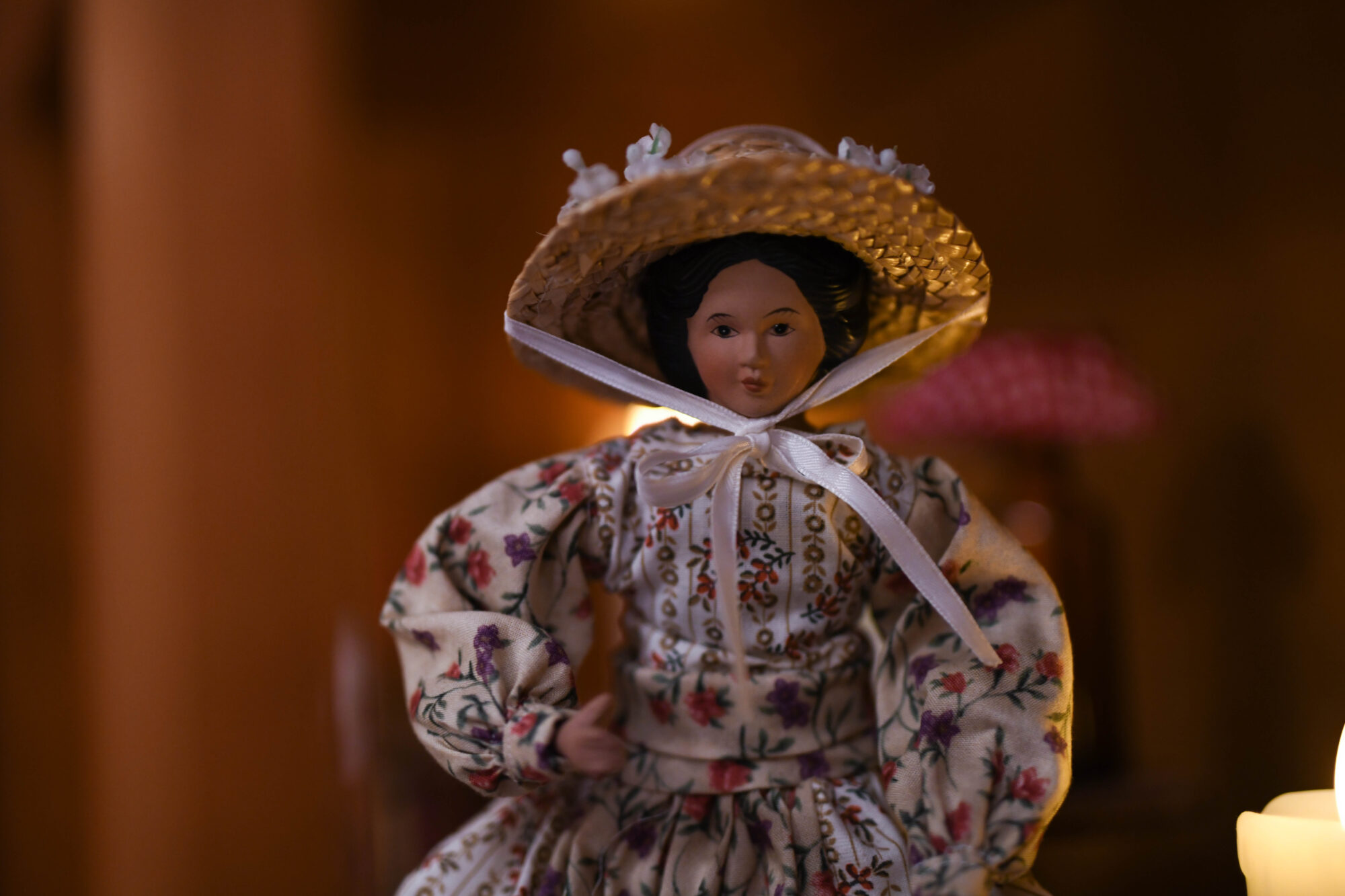 Priscilla reached for her hat. “It’s been lovely getting to know you, Dorothy and Beverly. I hope you can come back for a visit again soon!” She tied her bonnet strings in a big bow. “I’m due in the library in five minutes but I wanted to give you each a quick hug before I go.”

“Of course!” Dorothy’s smile was gentle. “It’s been wonderful to meet you, Priscilla.”

Hugs were given all around and then Priscilla left for the library. Miss Esther closed the glass door and then turned to their guests.

“What are your plans for the day? You are certainly welcome to stay as long as you like.”

“Thank-you so much.” Beverly spoke for them both. “We have an appointment at the Air Basket in about half-an-hour and then we’ll catch the Tiny Wheels Express to Oak Haven.”

Miss Esther nodded. “Certainly. Can I help you with your suitcase?”

“Oh, I’ll get.” Dorothy waved a hand. “It’s really light and I’ve learned just how to carry it, even if it is almost as tall as I am.”

“Could I talk with you, Miss Esther, about something while Dorothy packs up the last of our things?” Beverly smiled and her eyes sparkled.

“Of course.” Miss Esther was surprised. “How about we sit in the library?”

Dorothy disappeared upstairs and the other two settled themselves in the library. 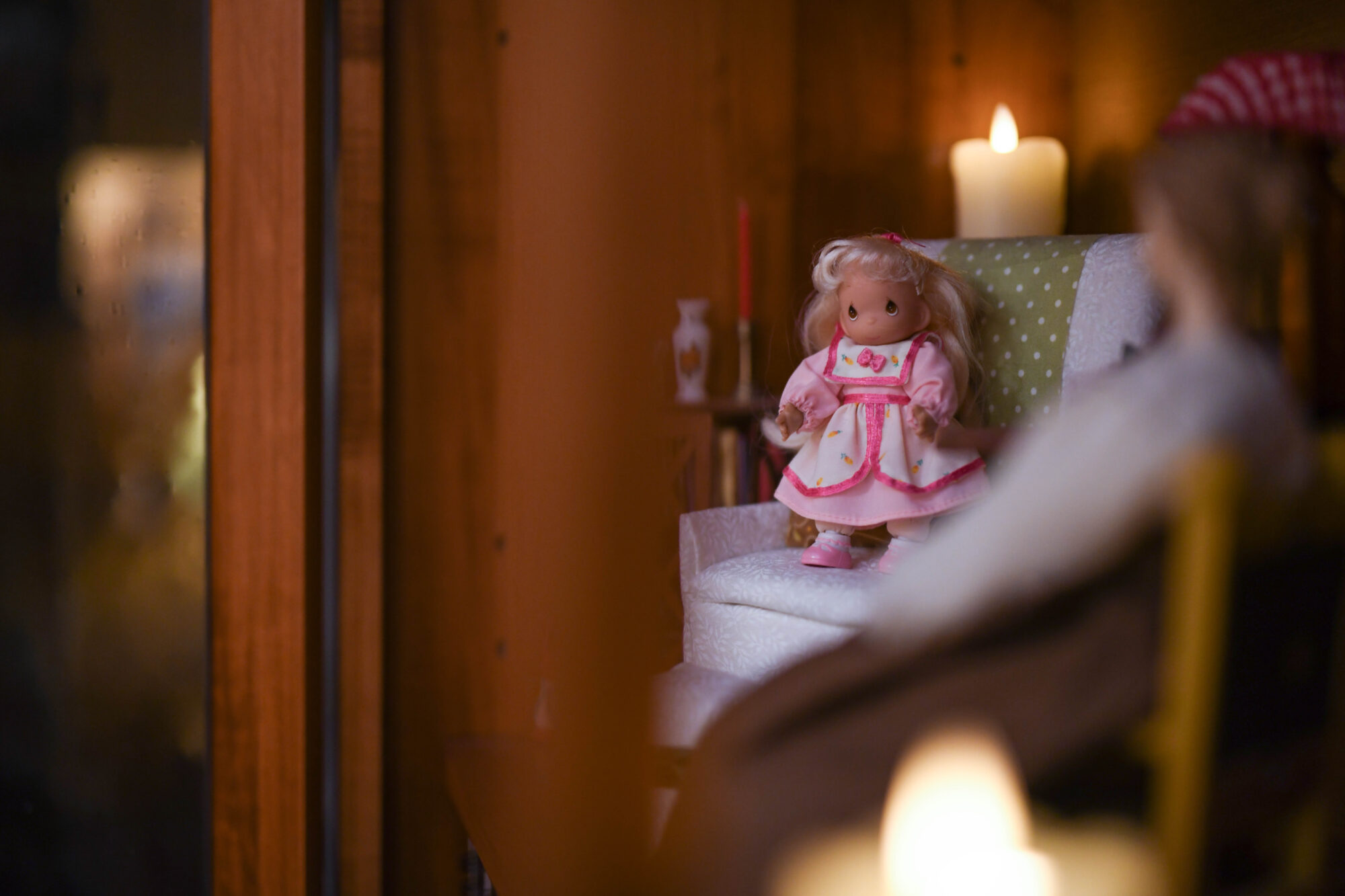 “I wasn’t sure when I was going to get the chance to say something, but Priscilla’s leaving for work was perfect timing.” Beverly’s voice was almost a whisper. “Priscilla mentioned that you are looking for a piano?”

“Why yes, we are.” Miss Esther’s eyes widened in surprise. “We thought it would be fun to have on Bible study nights and for sister duets.”

“Oh, this is so perfect!” Beverly hugged herself in her joy. “Such an answer to prayer!”

“Is it?” Miss Esther smiled despite her confusion.

“Yes!” Beverly clearly lived in a world of smiles. “You see, just last week I inherited a piano from a distant relative, but it’s far too big to put in our house!”

“It’s going to be delivered tomorrow and I had no idea where to put it. It’s about four times the size of our front door!” Beverly laughed. “Would you and your sisters like a piano? I can ask them to deliver it to your house instead.”

Miss Esther pressed a hand over her heart. “I hardly know what to say! My sisters would be so excited. How much are you selling it for?”

“It’s not for sale.” Beverly’s eyes sparkled. “It came to me as a gift and I want to give it as one. If you would pay for the delivery that would be sufficient. I’m also sure it will need to be tuned.”

“Are you sure?” Miss Esther tried to think through her joy. “If it’s your relative’s piano…”

“Yes, I’m sure. You see, I already have a K&K Mini that suits my hands perfectly. I’ve been praying all week about what the Lord had in mind for this huge piano and now I think I know! I love the ministry you and your sisters have here. It would be such a joy to know that the piano was praising the Lord and being used in His service.”

Miss Esther was deeply touched. “What kind is it?”

“It’s a full-sized, upright, nine-inch K&K.” Beverly beamed. “It’s only a couple years old so it has all the updated features.”

Miss Esther couldn’t speak. She just leaned back in her chair and tried not to cry. She handled the sisters finances and she knew that buying such a piano would be WAY out of their price range. Now the Lord wanted to send them one for free?

Finally Miss Esther found her voice. “Beverly, I hardly know what to say. Thank-you so much. I’m quite sure we would love to give the piano a home. How much do piano deliveries cost?”

“This service delivers so many things they do it very cheap. I think they said about ten cents, but with the extra distance they might make it twenty.”

Miss Esther could hardly believe it. “Would you mind if I ran upstairs and mentioned it to Susanna? I think I already know what Priscilla would say.”

“Please do! I can call the delivery service when I get home.” Beverly clapped her hands for joy.

Miss Esther wondered who was more excited, herself or Beverly?

In a few moments Miss Esther was tapping at Susanna’s door.

Miss Esther slipped into her sister’s room and closed the door behind her. Right away she knew Susanna really wasn’t feeling well. 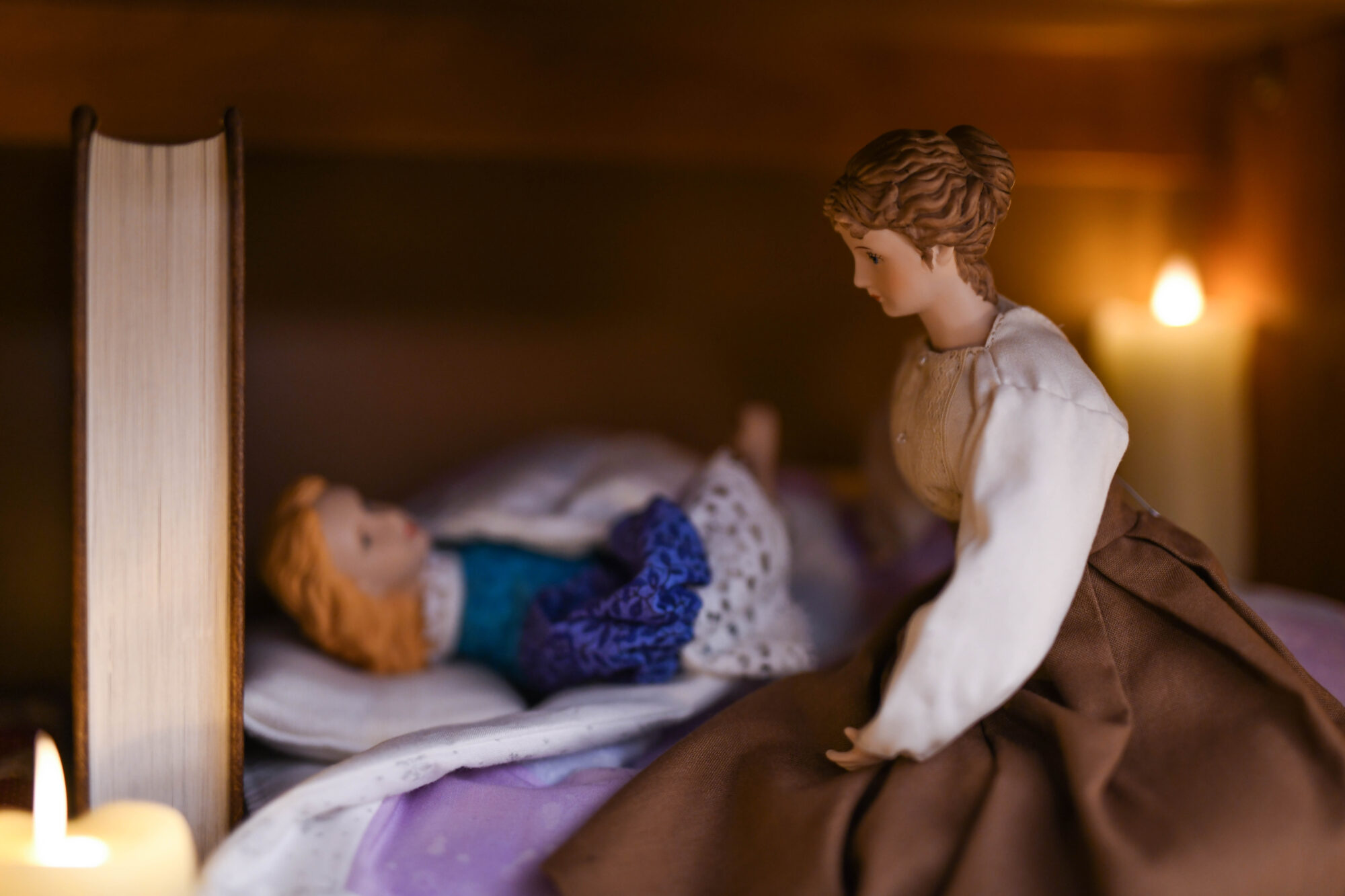 “Susanna, how are you feeling?” Miss Esther sat down on the edge of her sister’s bed.

“Terrible.” Susanna groaned with a smile. “My stomach just keeps cramping. The oil helped a little.”

“That is so odd.” Miss Esther shook her head. “I’ll call and see if Dr. Toodles can stop by.”

“Oh, it’s probably nothing.” Susanna buried her head more deeply in her pillow. “It could be gone in ten minutes.”

“But it hasn’t yet.” Miss Esther pressed her lips together for a moment. “I’m thinking we should still call him.”

Susanna shrugged as if she didn’t mind one way or another, which told her sister that the pain was pretty bad.

“Are Dorothy and Beverly safely on their way?” Susanna spoke in a whisper.

“Almost. They have an appointment at the Air Basket in about twenty minutes.” Miss Esther remembered the reason for her errand. “But Beverly took me completely by surprise this morning.”

“She wants to give us a piano.” Miss Esther could still hardly believe it. “We’d just need to pay for the delivery which would be about twenty cents.” 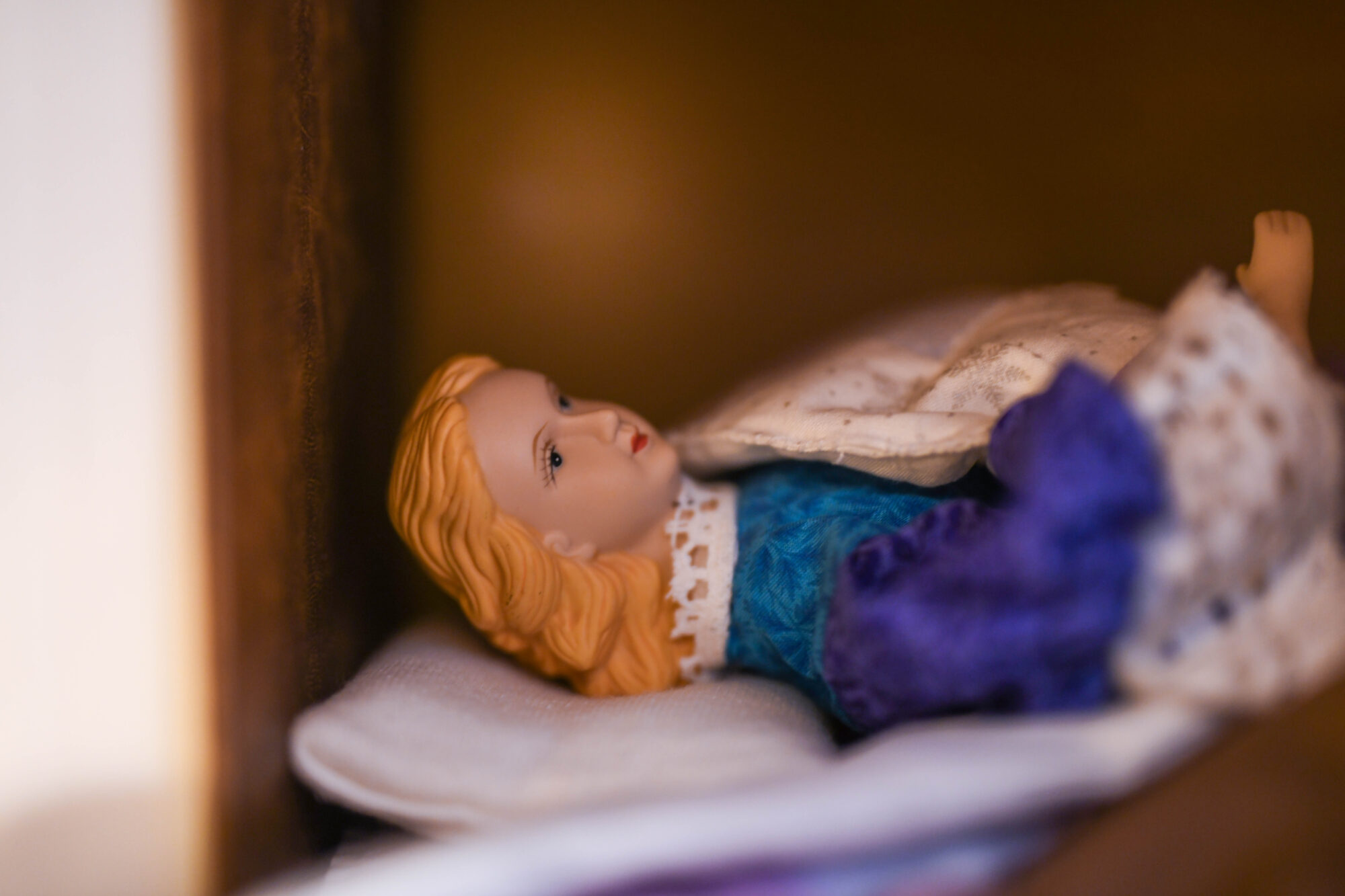 “Wow.” Susanna shook her head. “That’s amazing. What an answer to prayer on both sides!”

“Of course!” Susanna was surprised.

“I’m 99.99% sure what she would say!” Susanna smiled. “Let’s surprise her, Esther. Imagine her face when she walks into the room and finds the most wonderful piano she’s ever seen?”

“But where would we put it? It’s a nine-inch, Susanna!”

“We’ll just have to rearrange.” Susanna snuggled down deeper into her bed. “We were due for that soon anyway. Maybe we need to rent some more space in this house…”

Miss Esther tapped her chin in thought. Her sister was right. This piano was going to make things far more interesting than she had thought!

“Can I get you anything?” Miss Esther rose. “I need to head back downstairs to see to our guests.”

“Some water would be nice.” Susanna closed her eyes.

“Definitely.” Miss Esther tiptoed from the room and closed the door quietly behind her. 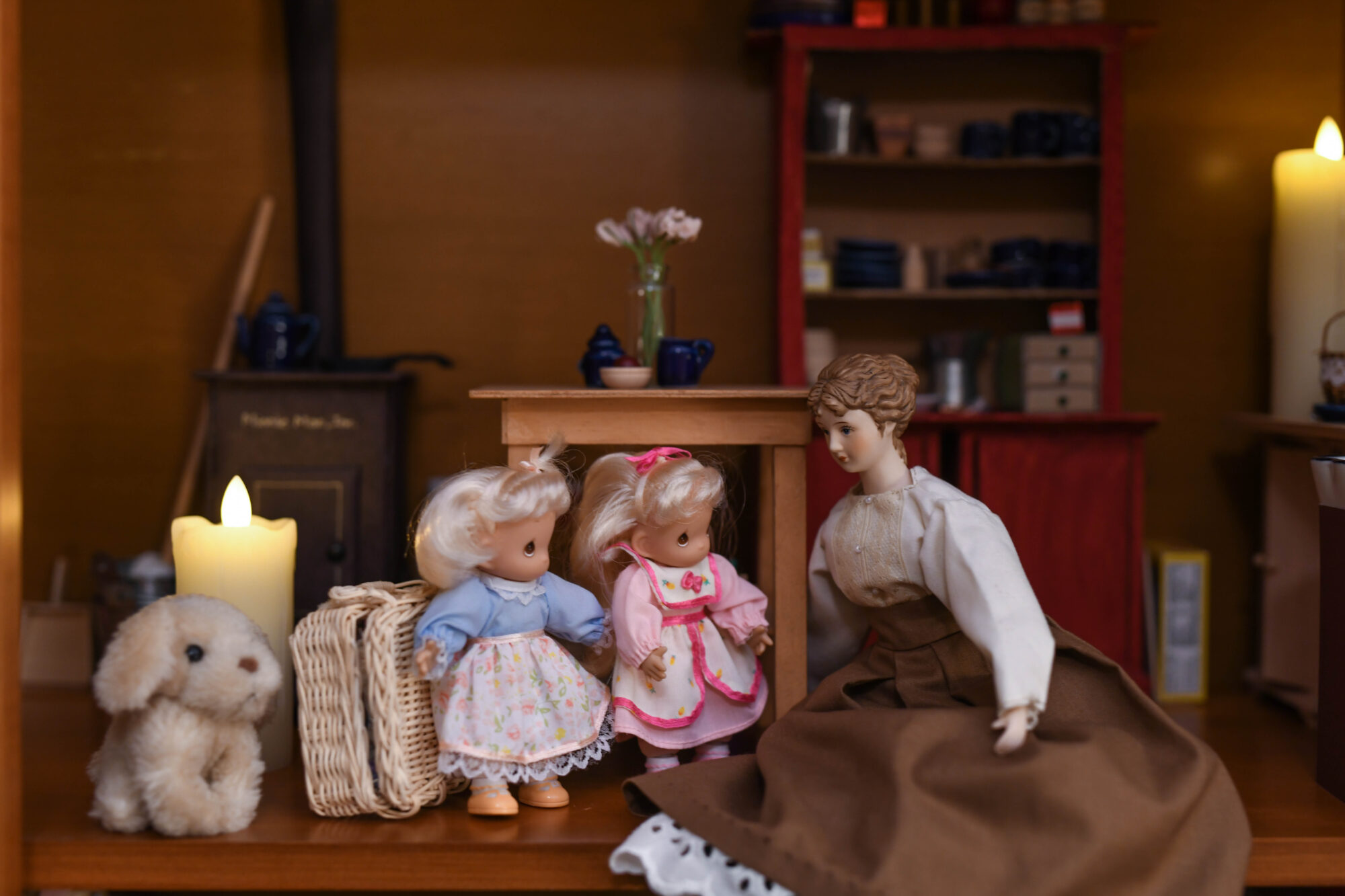 Soon she was back in the kitchen. She found Beverly and Dorothy waiting by their suitcase.

“I told Dorothy I was able to talk to you.” Beverly’s eyes sparkled.

“And we would love to say ‘yes’.” Miss Esther bent to be down closer to their height level. “We can’t thank you enough. We’ve been praying for a piano and this is so far beyond what we were planning for.”

“The Lord likes to do that.” A quiet light shone in Dorothy’s eyes. “He is able to do way above our own little dreams.”

“We are so happy to give it to you.” Beverly gave Miss Esther a hug. “I’ll give the delivery service your number and they will call to let you know when it will be arriving.”

Miss Esther nodded. “We plan to keep it a surprise for Priscilla. She won’t say it, but she’s very good on the piano. Susanna and I can’t wait to see her face when she walks into the room and finds a piano far more exquisite than we were looking for.”

“That will be so fun!” Beverly clapped her hands. “Do write and tell us all about it.”

“I will.” Miss Esther gave Dorothy a hug as she spoke. “You’ll have to come visit us so you can see it too.”

“We’d love to do that!” Dorothy took up the suitcase. “Alright, Beverly, we’d better be going.”

The sisters moved out onto the sidewalk and turned back to wave.

“The Lord be with you till we meet again!” Miss Esther waved back.

Soon the sisters had walked out of sight and Miss Esther went back into her house. Exciting as the idea of a new piano was, Miss Esther knew the most pressing matter at hand was Susanna’s sickness.

She needed to call the doctor right away.