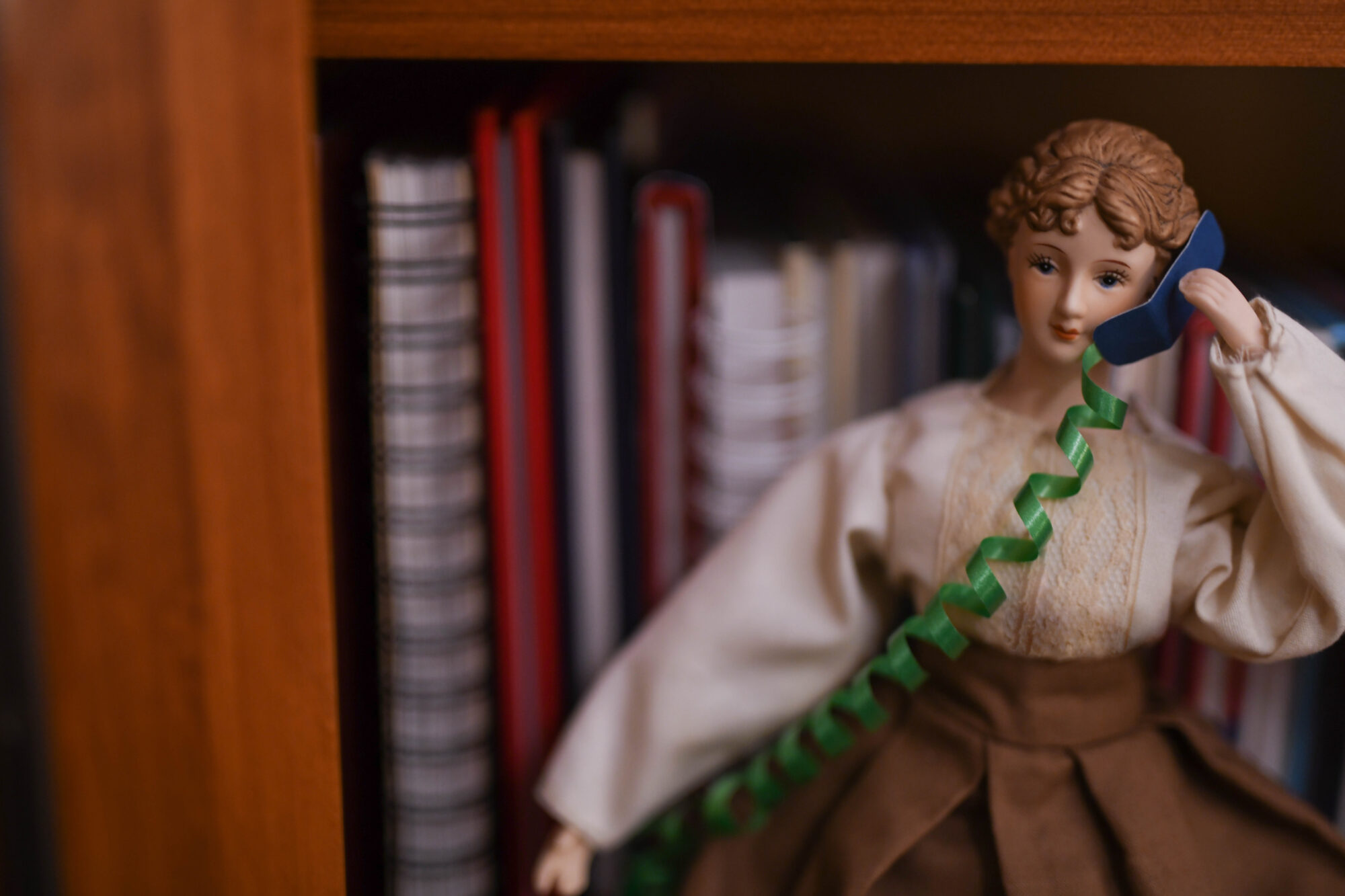 Miss Esther hurried down the stairs to the lower level where the telephone was. She quickly dialed the doctor’s number.

“Good morning, you have reached the office of Dr. Toodles. This is Jane. How may I help you?” The receptionist’s voice was very calm.

“Good morning, Jane. This is Esther MaeWell from the Walnut House. My sister Susanna woke up with terrible stomach cramps today and they just aren’t going away.”

“Oh dear, the poor girl.” Jane’s voice was sympathetic. “Dr. Toodles is out on a call at the university. I’ll ask him to stop by on his way home. He should be there about lunch time.”

“Thank-you so much.” Miss Esther could have sighed with relief. “Hope you have a great afternoon, Jane.”

Miss Esther hung up the phone and leaned against the stairs in relief. Dr. Toodles was a good friend of the sisters and had a way of finding out exactly what was wrong when it came to health matters.

Miss Esther went back to the kitchen and poured a glass of water for her sister. She filled a hot water bottle at the same time and then took both upstairs.

Susanna was feeling a tiny bit better and was grateful for the water. Miss Esther went into the guest room and found that their guests had already piled the sheets on top of their bed.

“Those dear girls.” Miss Esther shook her head. “They must think of everything.”

Miss Esther remade the bed with clean sheets from the linen closet and then took the used ones down to put in the laundry. She’d have to be sure to make extra time for the laundry next Tuesday. Sheets were a more challenging thing to wash when one did things by hand!

Miss Esther stashed the sheets in the big laundry basket and then collected some cleaning supplies. Despite everything else that was going on, the lower level still needed to be cleaned.

Miss Esther dusted her room and then mopped the floor and stairs. She sang a quiet hymn as she worked. She had many things to think about but Miss Esther wasn’t sure she could think them and do her cleaning at the same time! So she decided to sing and think later.

Soon the floor was sparkling clean and the dust was nowhere to be seen. Miss Esther put away her cleaning supplies and went to check on Susanna. Her sister seemed a bit lonely so Esther filled her in on the breakfast table conversation that she had missed.

“I’m so glad the Lord brought Dorothy and Beverly our way.” Miss Esther smiled as she finished her story. “They love Him so much and are such fun to talk to. I think we will see them again!”

“I hope so.” Susanna looked weary. “I can hardly believe that Beverly wants to give us her piano.”

“I know!” Miss Esther shook her head. “I’m already thinking about where we should put it. I’m thinking it should go in the library so we can use it on Bible study nights.”

“Oh, and I called the office and Dr. Toodles is supposed to be here around lunch time.”

There was a distant knock at the front door.

“That must be him!” Miss Esther leapt to her feet and went swiftly downstairs. 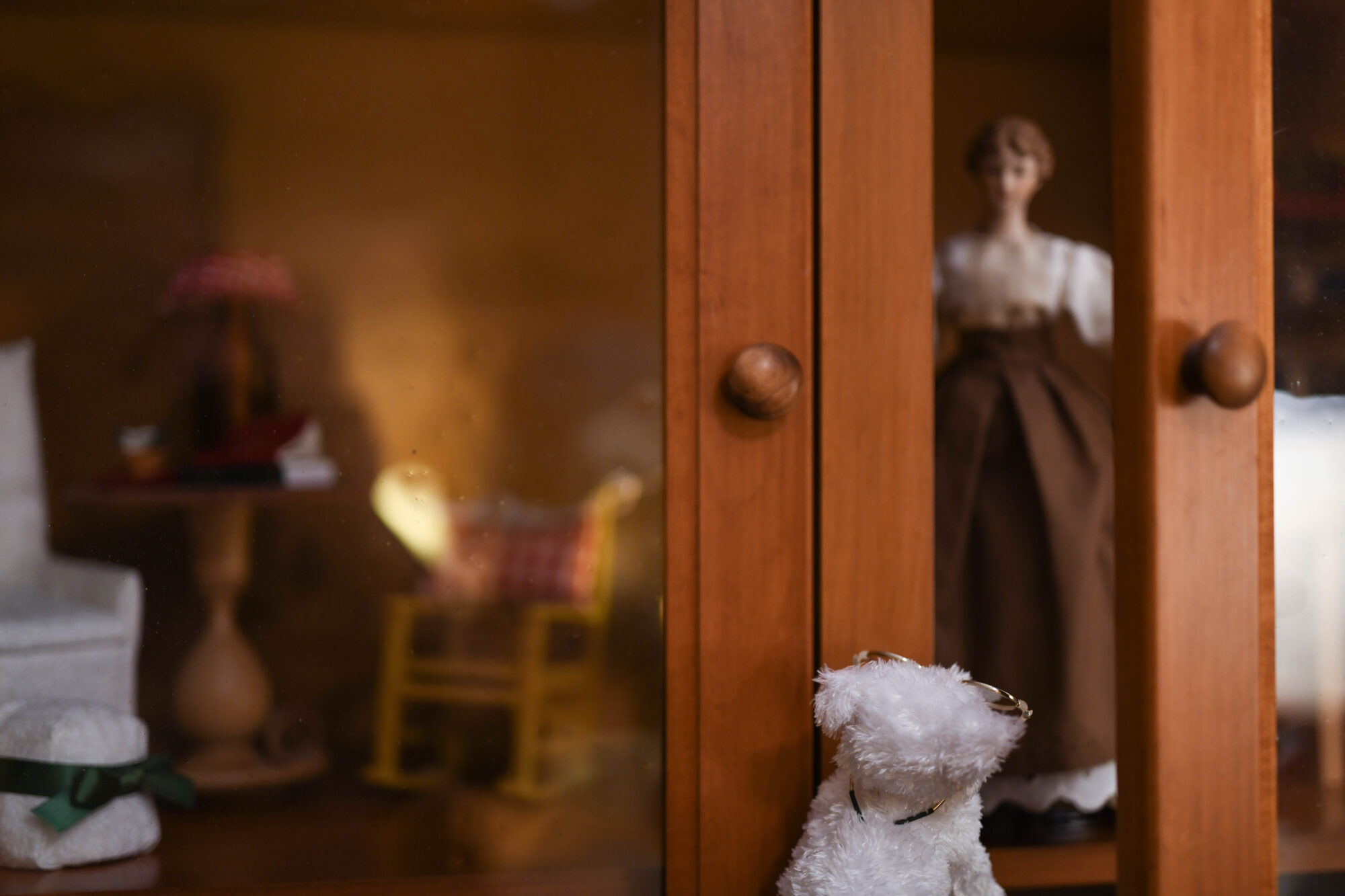 Sure enough, the village doctor was waiting on the front step.

“Dr. Toodles, so good to see you!” Miss Esther was relieved. “Thank-you so much for coming.”

“Always a pleasure to see you and your sisters, Miss Esther.” Dr. Toodles stepped into the kitchen. “I’m sorry to hear Susanna is feeling poorly.”

“The cramps have been pretty bad.” Miss Esther nodded. “Susanna is upstairs.”

Cashew and the doctor were great friends, but they waited to catch up until after Susanna had been cared for.

Susanna described her symptoms and Dr. Toodles listened attentively. At last he nodded. 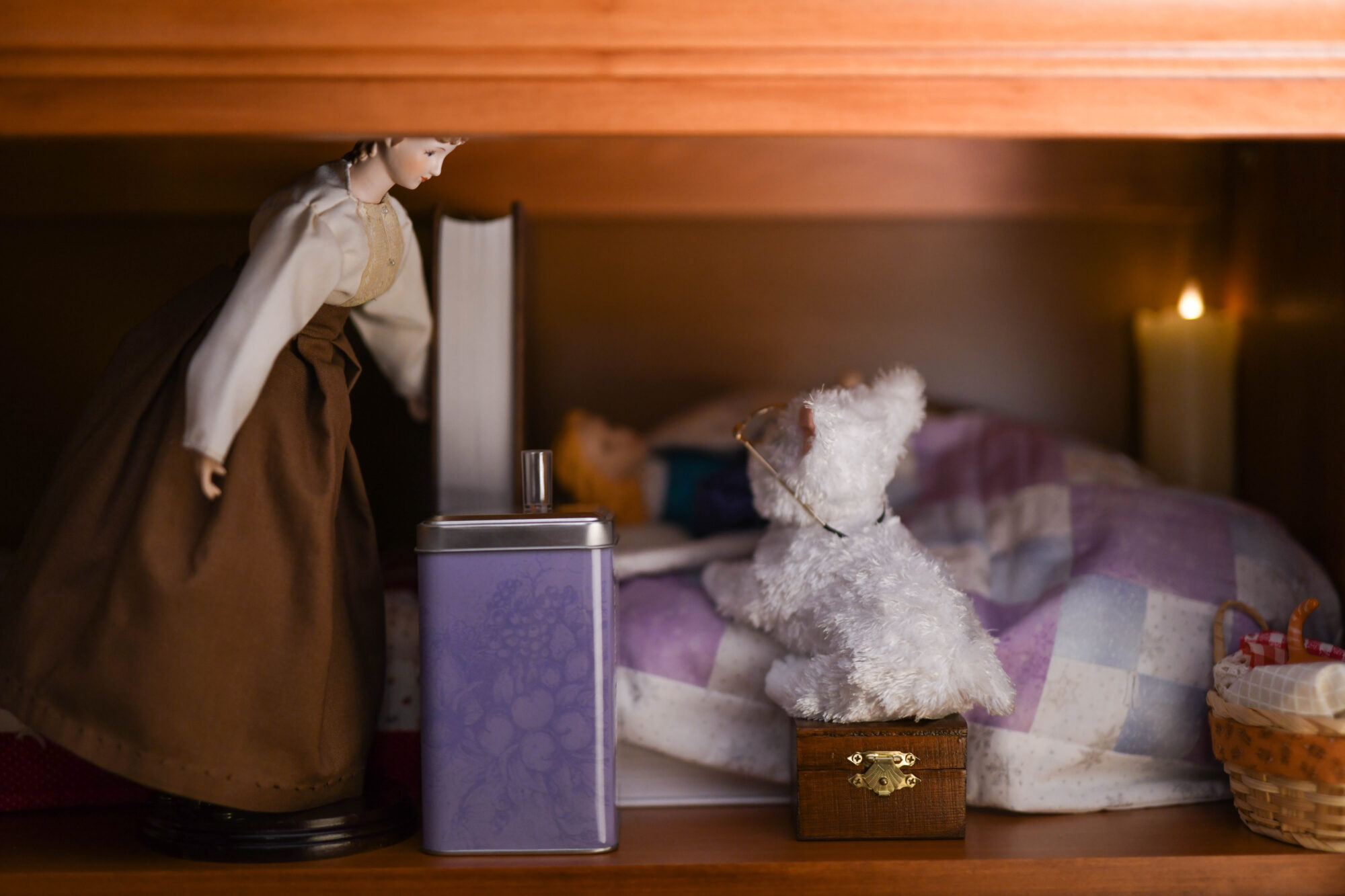 “You’re one of the healthiest citizen’s I know, Susanna.” Dr. Toodles reached into his medical box for his stethoscope. “And even if you weren’t, there’s no bug going around Small Village right now. I’m guessing it’s allergies.”

Dr. Toodles took Susanna’s pulse, listened to her heartbeat and felt her stomach. At last he pulled a small tablet from his box and started making notes. Then he took out a small bottle.

“You have a clear case of spring allergies.” He smiled kindly and turned towards Miss Esther. “Give her a spoonful of this medicine with a glass of water every hour.” Dr. Toodles handed the bottle to Miss Esther. “If she’s no better in four hours, give me another call.” He gave Susanna a smile. “But you should be up again like normal tomorrow, Susanna.”

“No trouble at all.” Dr. Toodles tucked his things back in his medical box. “You have our number, Miss Esther?”

“Yes, we do.” Miss Esther moved to walk downstairs with the doctor. “Thank-you so much for stopping, Dr. Toodles. We so appreciate it.”

“A joy, a real joy.” Dr. Toodles pushed his glasses a bit farther up on his nose. “This is why I went into the medical field, to be able to help folks and see them smile again. Nothing quite like it in my opinion!”

“Perhaps that’s because it’s something the Lord has called you to do.” Miss Esther moved into the library. “I’m sure He is pleased when you serve Him as He designed you to.”

Dr. Toodles tipped his head to one side. “That’s true. I do sense His pleasure as I go about my work. I’m doing it for Him anyway. My patient’s smiles are just the cherry on top!”

Miss Esther smiled and reached for her purse. “How much do I owe you, Dr. Toodles?”

“Just a penny for the medicine. I was walking by here anyway and that only took me some five minutes.” Dr. Toodles glanced at his watch.

“Are you sure?” Miss Esther shook her head.

“Positive. Though, if you had any of those molasses cookies around I wouldn’t turn one down.”

Miss Esther handed the doctor the penny and waved towards the big chair in the library. “I sure do! Why don’t you and Cashew catch up a bit? I’ll bring some cookies for both of you.” 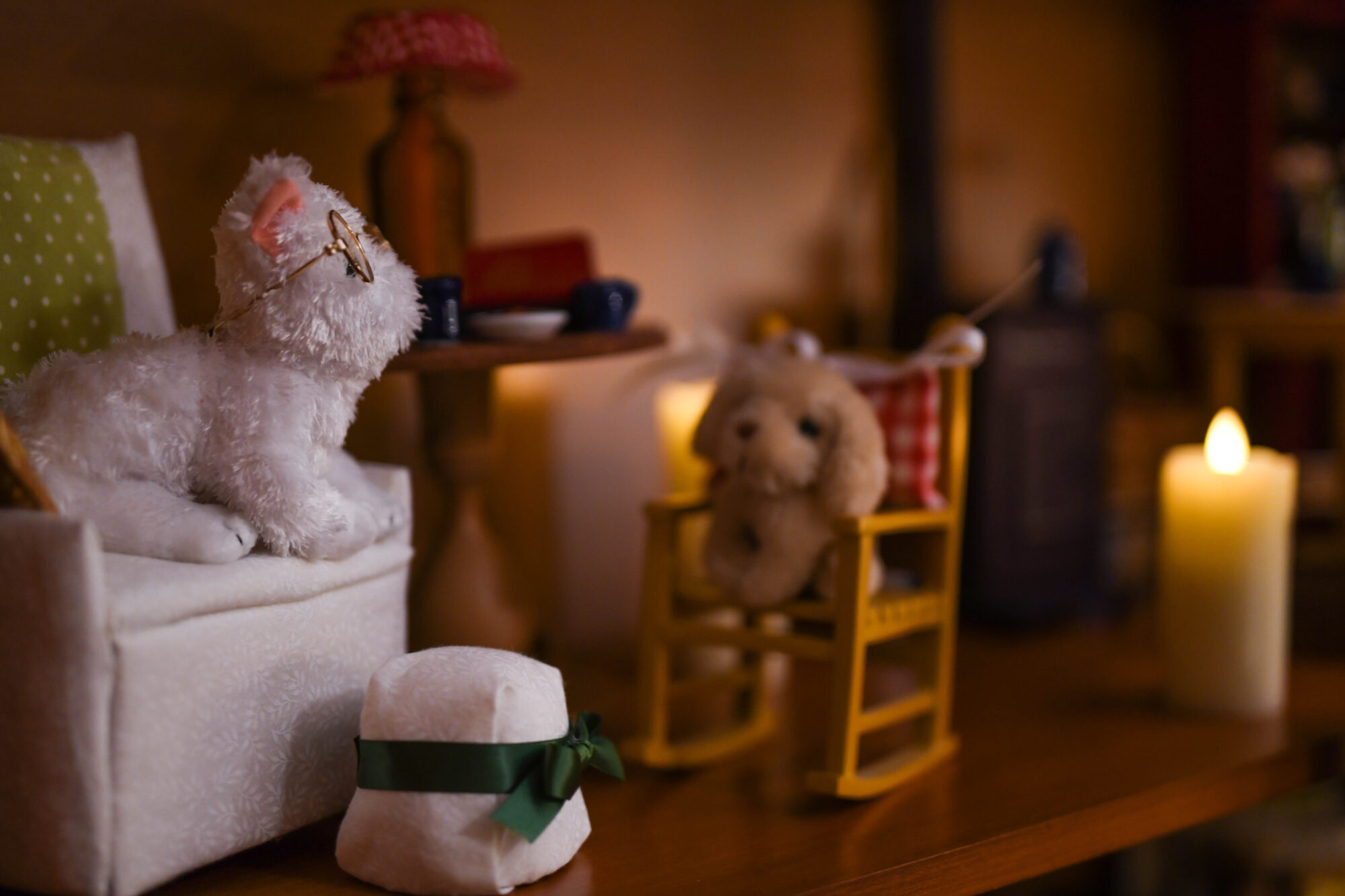 In a few moments Dr. Toodles and Cashew were enjoying a chat in dog language in the library. Miss Esther served them tea and cookies for which they were most grateful. Miss Esther took Susanna a glass of fresh water and gave her the first dose of the medicine.

Miss Esther set down the medicine bottle and whirled to see Carrot’s head sticking out of his basket.

“Oh Carrots, I completely forgot about you! I’m so sorry!” Miss Esther reached to lift her cat from the basket. “You have to be hungry.”

“Meow, meow.” Carrots tipped his head as if to say he completely understood that Miss Esther had had a lot on her mind that morning.

Miss Esther carried her pet downstairs and fed him some warm milk plus a molasses cookie. Carrots was delighted and purred loudly to demonstrate his appreciation.

“Well, Carrots, how’s the leg doing?” Dr. Toodles set down his empty teacup and trotted over.

The doctor pulled a fresh bandage out of his box and set to work.

“You must see everything, Dr. Toodles.” Miss Esther shook her head with a smile.

“Not quite.” He felt over Carrot’s leg to see how it was mending. “But I’ve asked the Lord to give me eyes to see what needs doing and then the strength to do it. He has answered in big and little ways.”

“That’s a wonderful prayer request. I should pray that myself.” Miss Esther took the empty mugs to the kitchen sink. 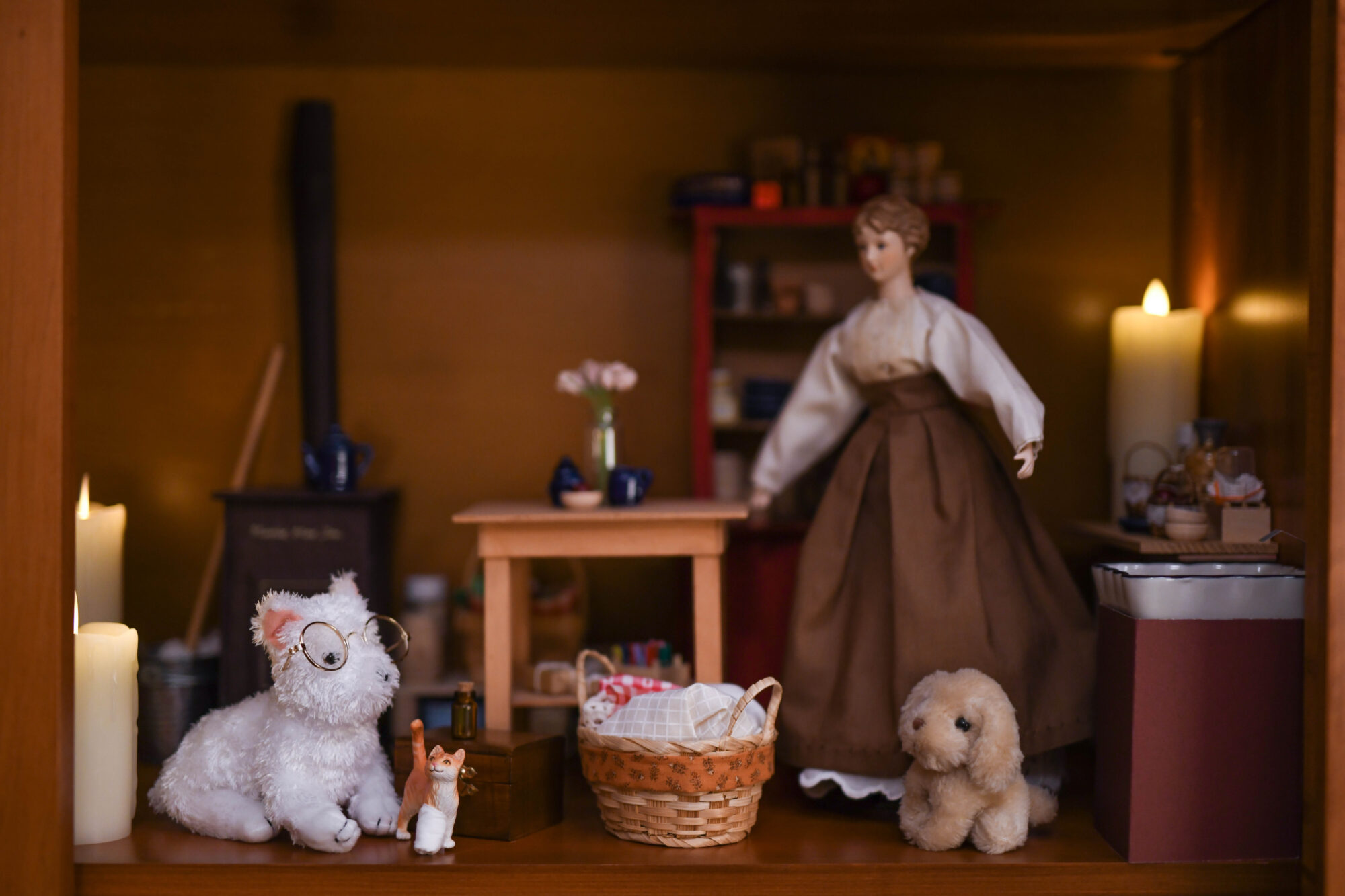 “The prayer request is a good one, just be sure you’re ready to pay the price tag when the Lord answers.” Dr. Toodles wound a new bandage around Carrots leg. “It’s the kind of prayer the Lord loves to answer and you’ll find yourself with much less free time on your hands.”

Miss Esther turned from the sink with a smile. “Ah, but my hobby is serving, Dr. Toodles. If I can do others good in my free time, I’m delighted!”

In no time at all Carrots’ leg was freshly bandaged and Dr. Toodles prepared to take his leave. Miss Esther paid him an extra penny for his help with Carrots. They shook hands and the doctor left with a promise to be back if Susanna had more trouble.

Miss Esther closed the door and then leaned against it for a moment. “What a day this has been already!” She laughed slightly. “I hope the rest of the day is much, much calmer.”

Then suddenly Miss Esther remembered her invitation to tea that afternoon.

“Oh no!” Miss Esther pressed a hand to her forehead. “I completely forgot. Oh Lord, what should I do?”