Miss Esther reached the top of the stairs and entered the library. It seemed very quiet and still in the early morning light.

“I love this time of day!” Miss Esther moved to turn on the lamp. “Makes me feel so calm and so energized at the same time!”

“Whoof!” Cashew heard her voice and rose sleepily from his pillow.

“Good morning, Cashew! The Lord has given us a new Tuesday!” She scratched behind his ears. “How is my world’s greatest dog?” 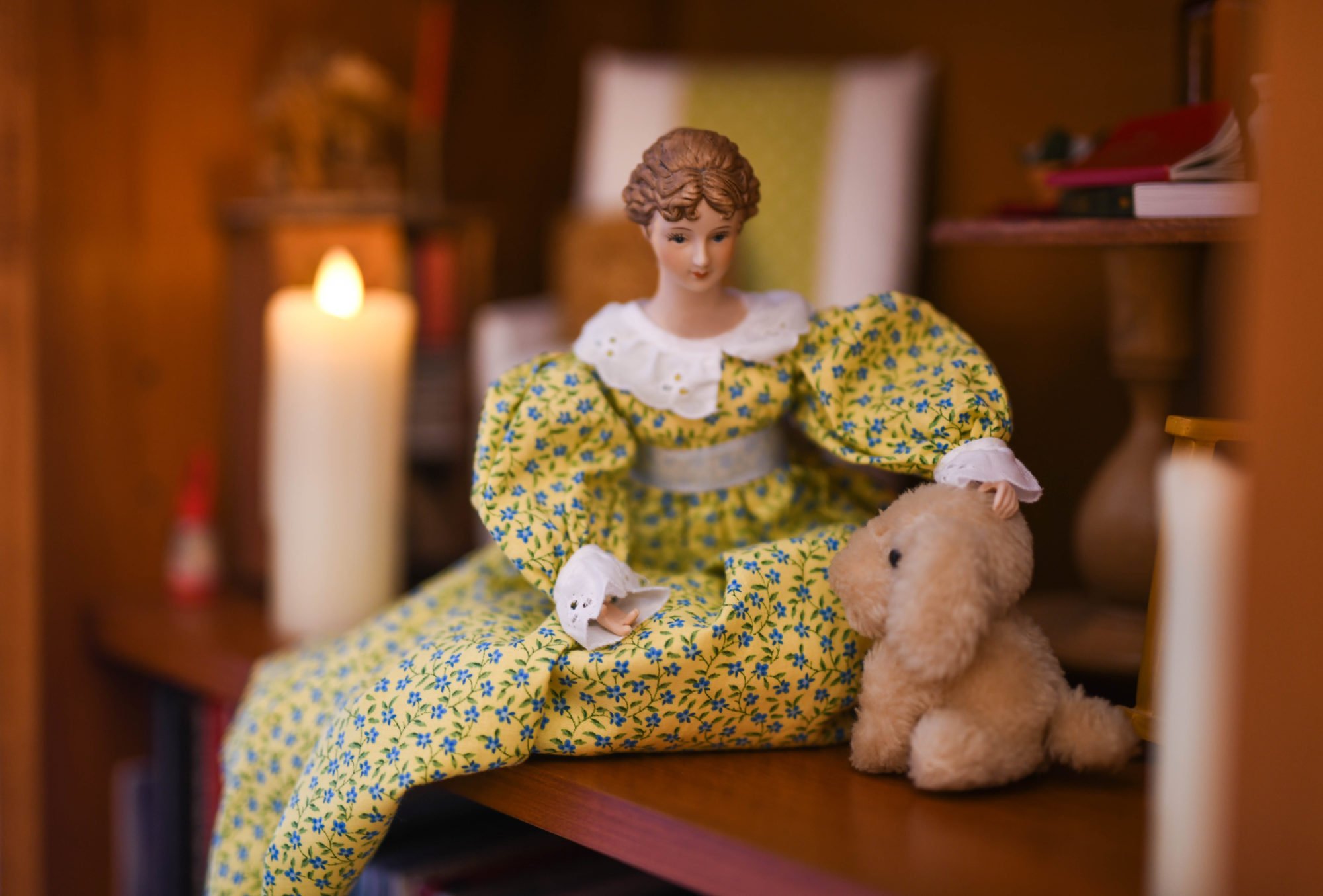 “And I’m doing quite well too, thank-you!” Miss Esther guessed his thoughts. “Now let’s get you some breakfast.”

In a few moments Miss Esther had filled Cashew’s bowl. Then she began what she fondly called ‘waking up the kitchen’. She turned on the lights, tended the fire in the stove, opened the blinds, tied on her apron and watered the sprouts she was growing.

At last Miss Esther dried her hands on a towel and went to check the stove.

“Perfect! I love this Mini Mae range, Lord. It heats up so quickly!” Miss Esther pulled out her skillet and set it on the front burner. She added a little coconut oil to grease it.

She reached for her mixing bowl. “Let’s see. I’m quite sure sisters will be hungry, so I’d better do two eggs apiece.” 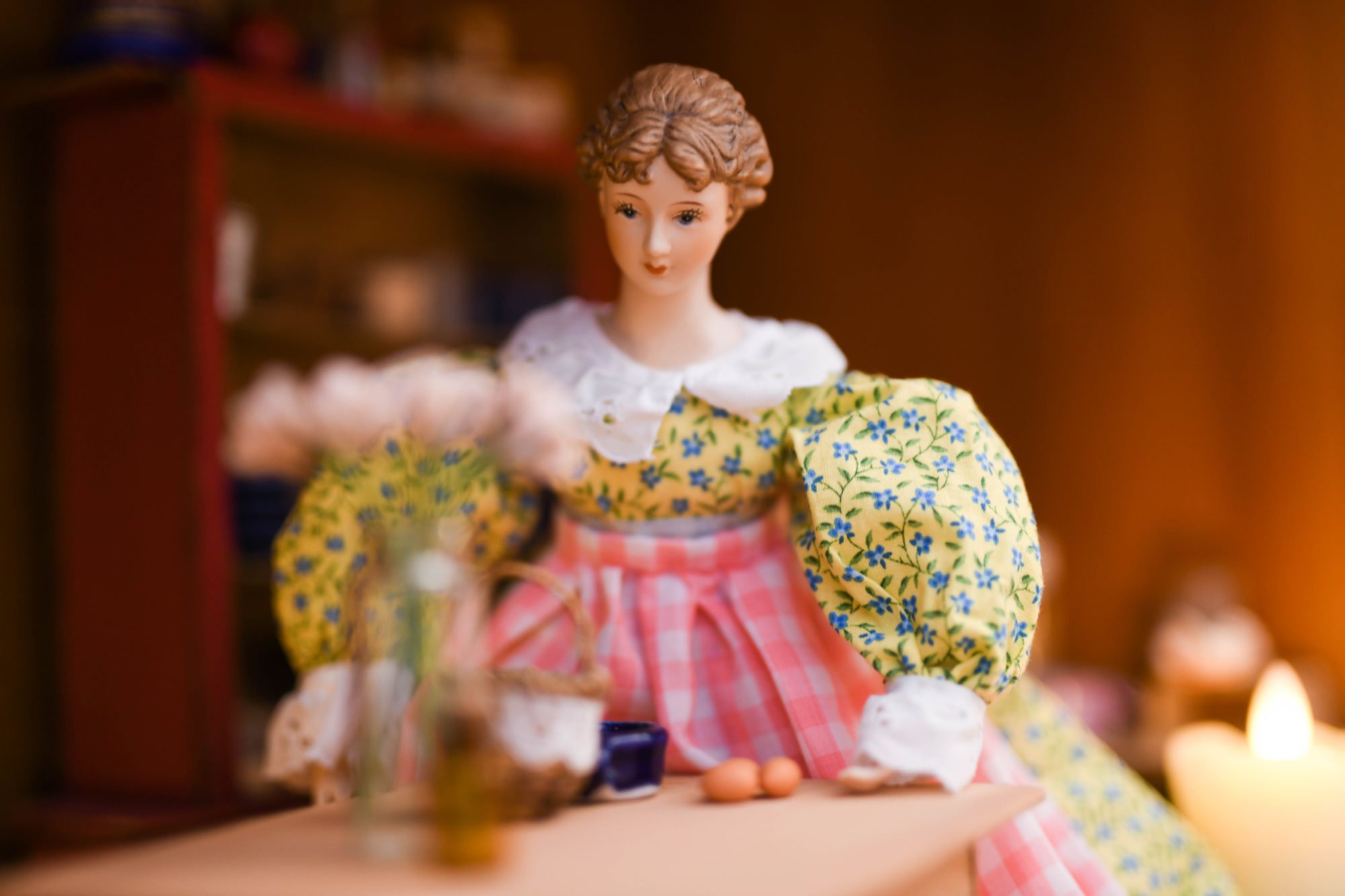 Miss Esther deftly cracked six eggs into the bowl, added a few tablespoons of water and whisked them together with a fork. A quick glance at the skillet told her it was ready and she poured the egg mixture right in.

“Now for the toast!” Miss Esther reached for the loaf she had purchased the day before from Martha at the Bethany Bread House. They’d eaten part of it for dinner the night before, but there was still plenty left for breakfast. “This should toast beautifully.”

Miss Esther was just sliding a pan of toast into the oven when she heard footsteps on the stairs.

“Three guesses and two don’t count…it’s Priscilla?” Miss Esther looked up just in time to see her sister glide into the library.

“Seeing your smiling face is one of the greatest blessings of my morning, Priscilla.” Miss Esther gave her sister a quick hug. “Did you get some good sleep?”

“Yes. Those library accounts took so much brain energy yesterday that all I wanted to do was sleep!”

“I’m glad you were able to! Would you mind setting the table?” Miss Esther checked her toast and stirred the eggs. “Breakfast should be ready in just a few minutes.”

“Of course!” Priscilla went to the the dish dresser and lifted down a stack of blue plates.

In no time at all the eggs and toast were done. Priscilla added applesauce, jam and peanut butter to the menu and lit the candle in the center of the table.

“Have you heard Susanna yet?” Miss Esther glanced at the stairs. “I wonder if she knows what time it is?”

“Oh yes! She was up and talking to Carrots when I came down.”

Priscilla stuck the extinguished match under the faucet to be sure it was out. “We’re just early. Susanna will be down exactly at 8. She’s very good at being right on time!”

In another couple minutes Susanna swept into the room, precisely at 8:00 o’clock.

“Perfectly on time, just as I said you would be!” Priscilla smiled at her sister from her place by the table. “Eggs and toast are ready!”

Susanna set Carrot’s basket down by the stove.

“And a good morning to you, Susanna! How is our favorite nurse?” Miss Esther reached into the icebox for the milk as she spoke.

“Very blessed.” Susanna smiled, but Miss Esther could tell her sister was weary. It had evidently been a long night.

Miss Esther poured a bowl of milk for Carrots and set it on the table.

“How are you, Carrots?” Miss Esther bent down to rub her pet’s back.

“It was a pretty uncomfortable night for Carrots.” Susanna gave the animal a loving smile. “But he did a good job managing the pain.”

“Carrots is a very brave cat.” Miss Esther sat down on the floor beside the basket. “Shall I help him get his breakfast?”

Miss Esther lifted Carrots out of his basket and the cat seemed genuinely delighted. He snuggled down in her arms with a happy purr. 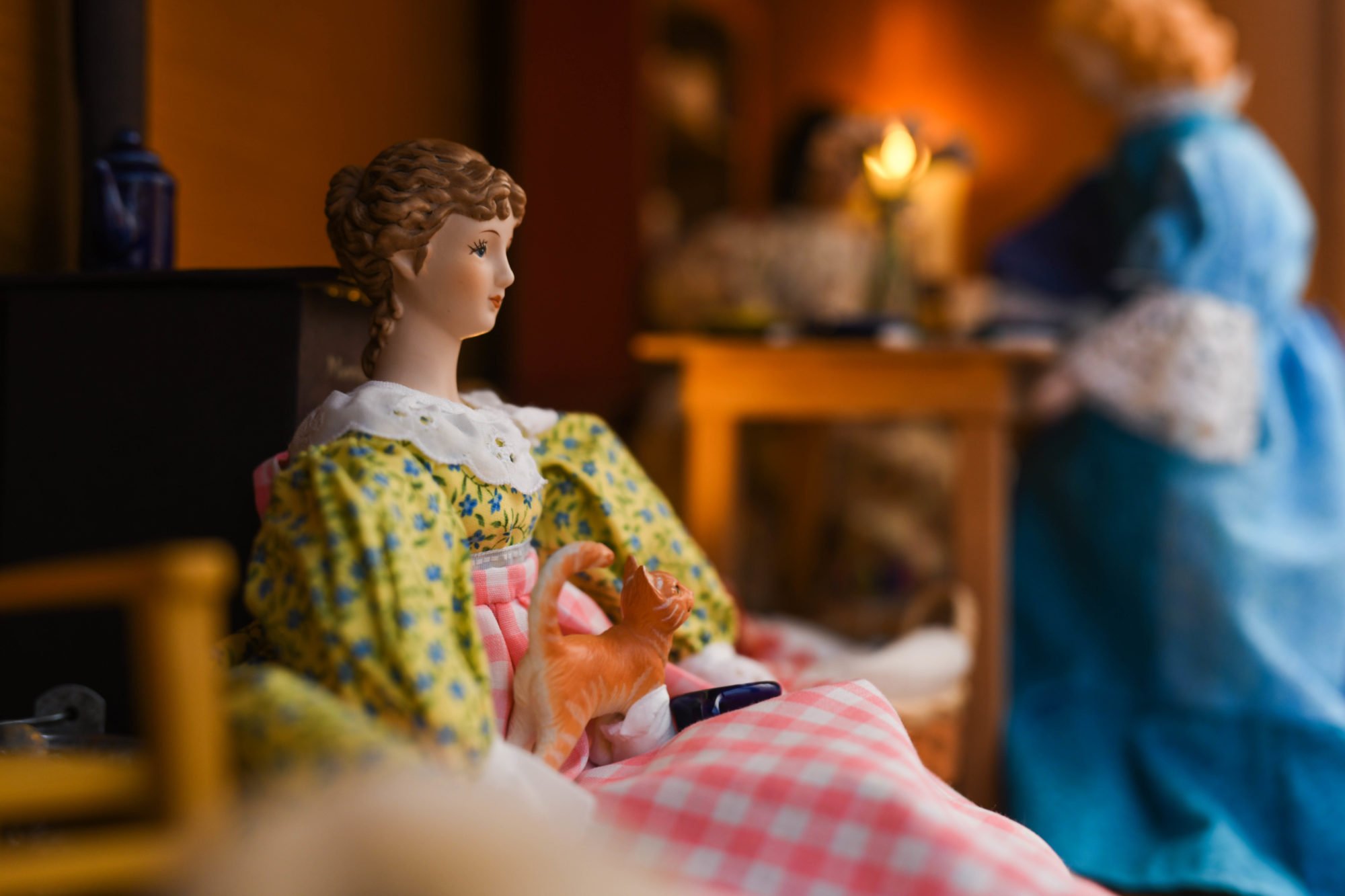 “Would you thank the Lord for our breakfast, Susanna?” Miss Esther looked up at her sister from her seat on the floor.

“Gladly!” Susanna dropped into her chair at the table and bowed her head. “Dear Heavenly Father, thank You for this breakfast and a new day. Please help Carrots to get some good rest today and his leg to heal well. Thank You. In Jesus’ Name, Amen.”

“Amen!” Priscilla rose to bring the eggs to the table.

“Here, Carrots, try some milk.” Miss Esther lifted the bowl of milk to where Carrots could reach it.

Breakfast was a lively affair, as it usually was for the sisters. Rarely ever did they run out of things to talk about. Once Carrots had finished his milk Miss Esther tucked him back into his basket and joined her sisters at the table. 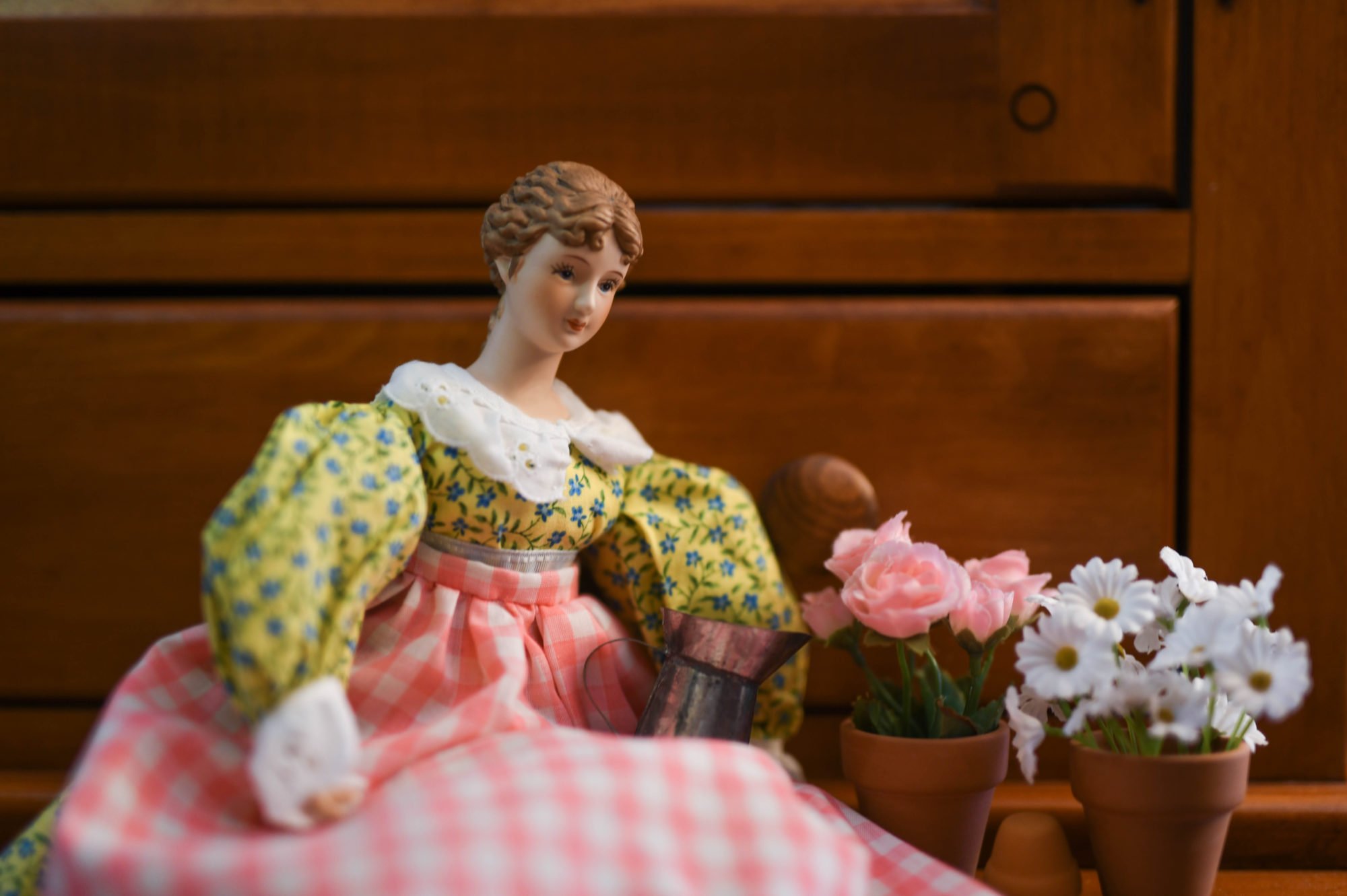 All too soon breakfast was finished, the dishes done and Miss Esther waved her sister’s off to their work. She stopped to water the flowers by the front door.

“Does one good to see flowers.” Miss Esther took a careful sniff of a brilliant pink rose. “And to smell them!”

Her watering finished, Miss Esther sat down on the sidewalk and swung her legs over the side. The spring air was crisp and she watched a few birds fly across the sky.

“Come, Esther, you must think!” Miss Esther leaned back against the step and began talking to herself, which she did often. “You’re going to tea this afternoon and you need to decide what to bake.”

She folded her arms. “Cheesecake would be just the thing. Mice love cheese cake, but I’m short on cheese just now. Cherry pie would be splendid but cherries are one of the things I usually don’t buy so Less didn’t bring them up.”

Miss Esther’s brow furrowed in thought. “Lord, what should I make? I’m not sure what to do.”

And then, Miss Esther had an idea.