Chapter 3: Miss Esther Gets a Letter

Miss Esther poured herself a glass of water and moved into the library. 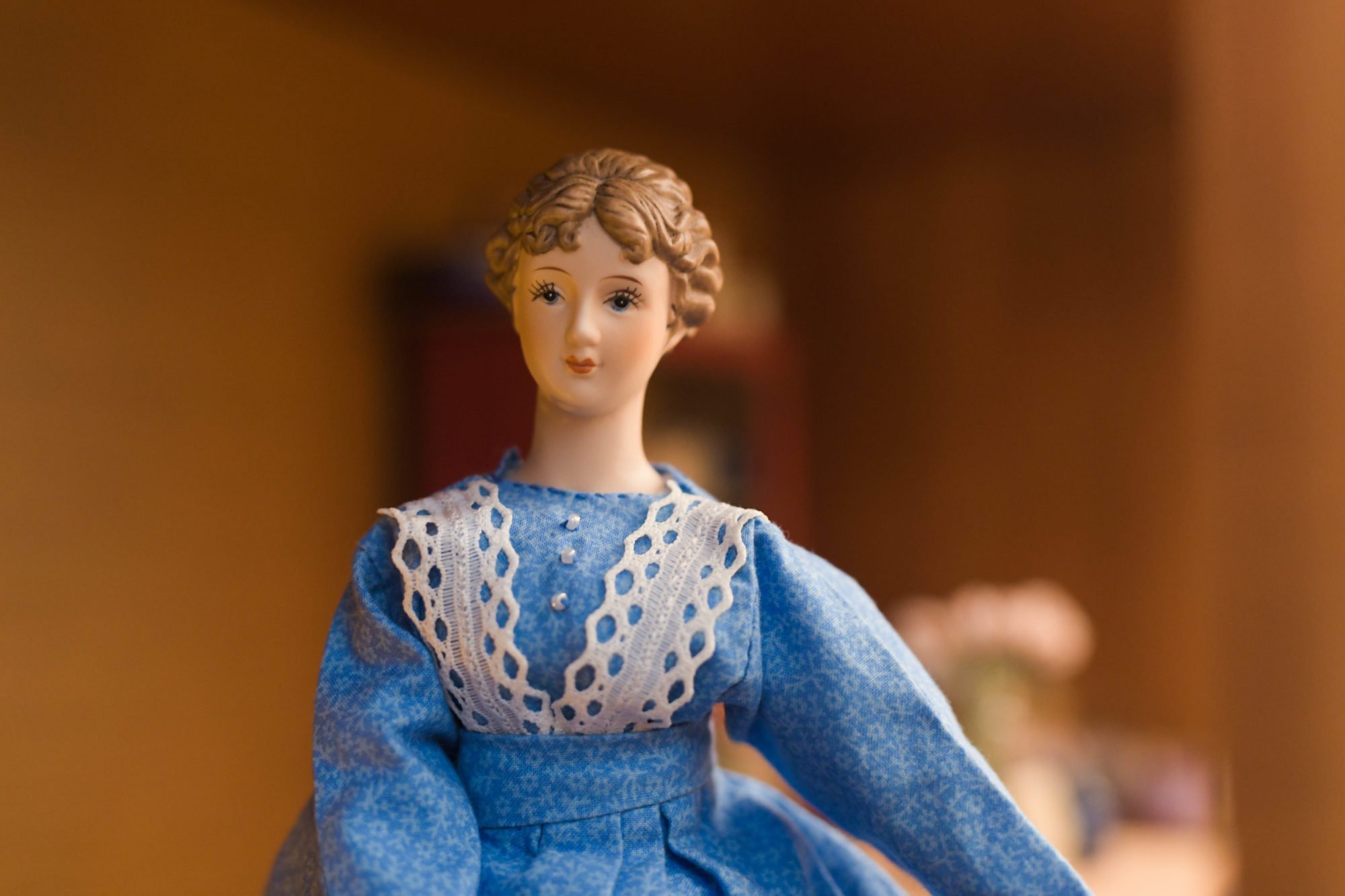 “Today we work on the budget!” Miss Esther drew a deep breath. “I’m going to hope it balances at the first try!”

Miss Esther set to work to clear off the library table. She put away the books about pianos that Priscilla had brought from the village library and pushed some of the decorations to one side. At last she had a free space in which to work.

Miss Esther reached behind the armchair for her office bag. It was full of all her essentials for handling the home office. Soon she had her file folder, budget book and calculator all spread out on the table.

“Lord, would You give me Your wisdom as I work on our finances today?” Miss Esther closed her eyes for one moment. “Thank-You for providing for us so that I can actually do a budget. And if it would be Your will, could last month balance without any trouble? Thank You. In Jesus’ Name, Amen.” 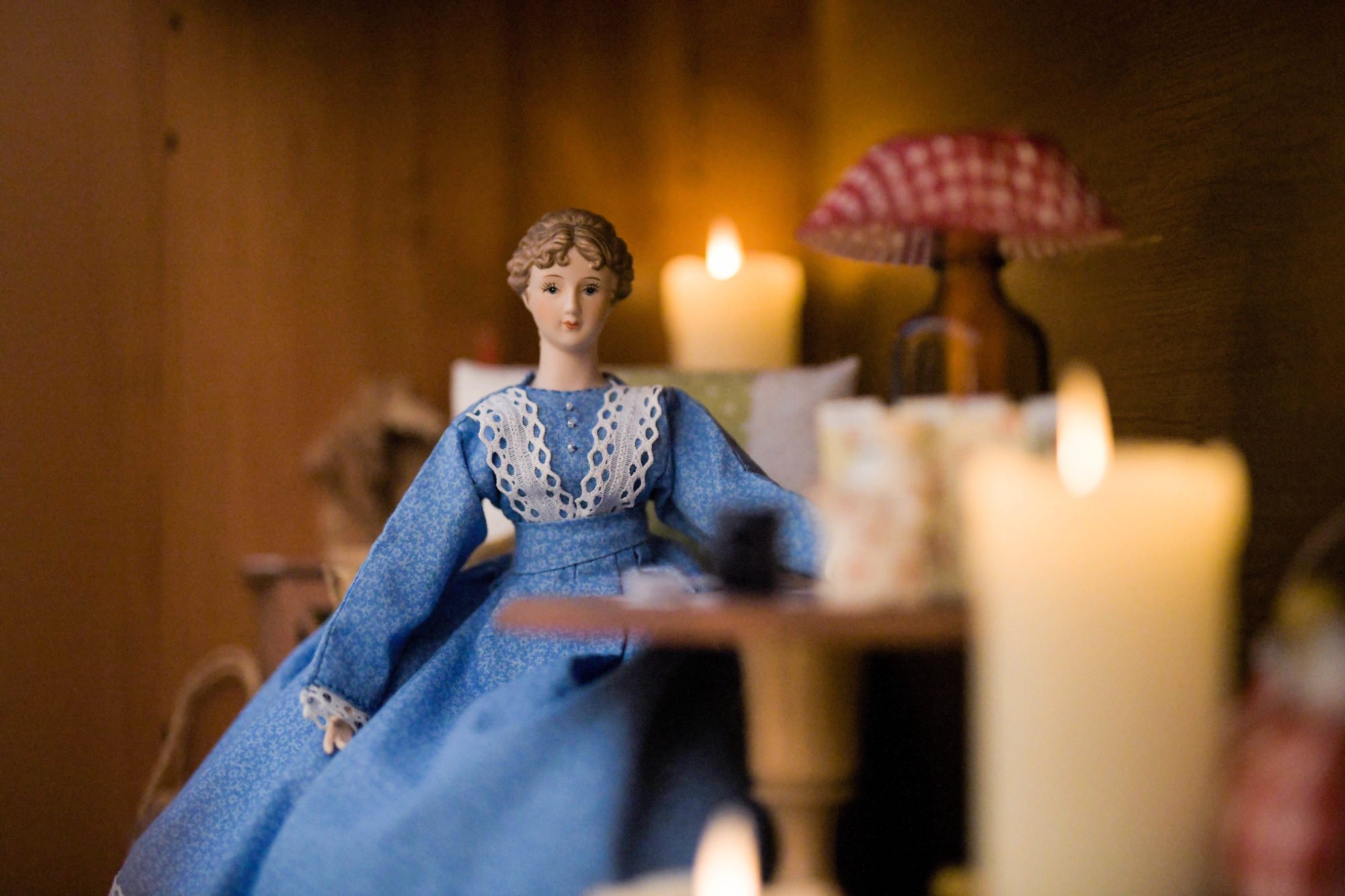 Miss Esther raised her head and reached for her budget book. After finding the page for the previous month, she took a stack of receipts from her file folder and began entering various expenses. Once assured that all purchases had been accounted for, Miss Esther reached for her calculator and began doing the math.

At long last she added all the numbers at the bottom of her budget sheet. Then she checked the total on her bank statement.

In no time at all Miss Esther had set up her budget page for the next month and sorted through her receipts. 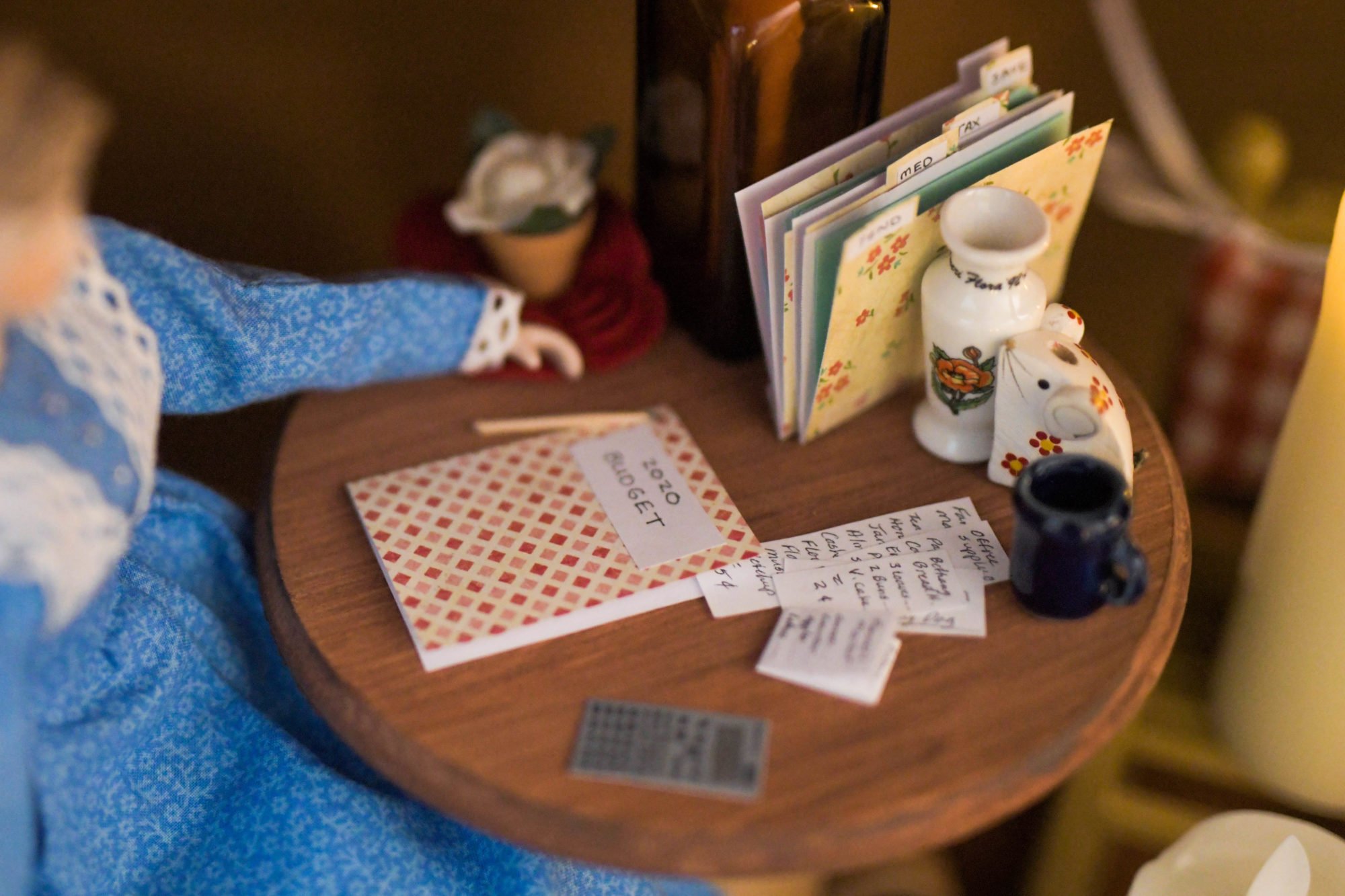 “Fortunately we can throw most of these out!” Miss Esther tossed the scraps of paper onto a nearby chair.

She filed the receipts she needed to save and then glanced at the clock. “This didn’t take me as long as I anticipated!”

Miss Esther tucked her office supplies back into her bag and then stashed it behind the chair. “The good news is, I know how much we have in our ‘Savings’ fund and we do have the option to think about a piano, depending on what it costs.”

Miss Esther smiled. “Lord, it amazes me how well You provide for us! You are so faithful.”

Miss Esther stretched and glanced about the room as she thought about what project to tackle next. 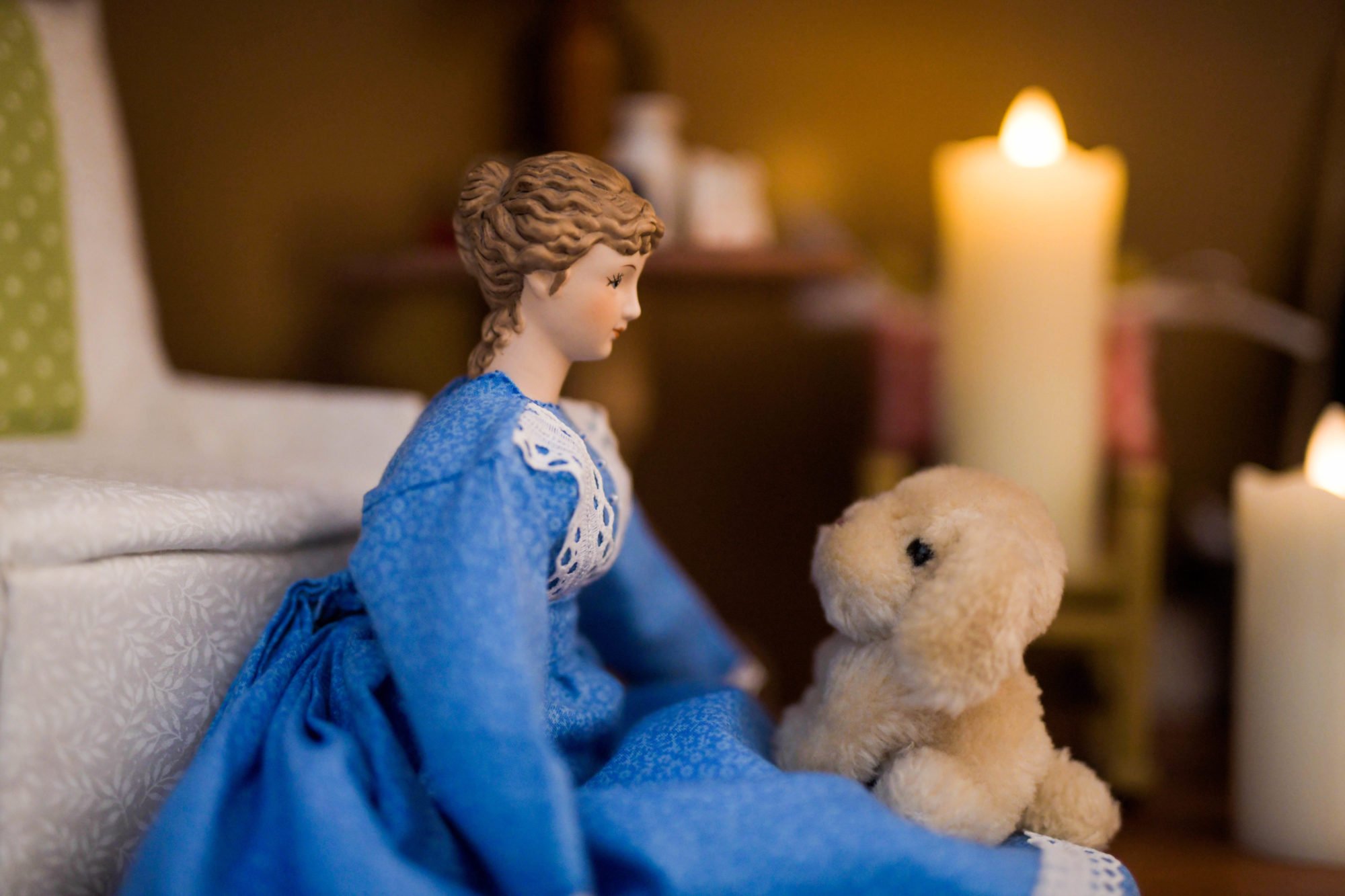 Cashew came over and put his front paws up carefully on her skirt. He whined.

Miss Esther knelt down with a chuckle. “How about a quick walk, Cashew?”

“Run and get your leash.” Miss Esther began to move towards the kitchen. “And I’ll make sure Carrots is okay for a bit on his own.”

Cashew dashed away in high glee and Miss Esther knelt down beside Carrots.

Carrots was dozing quietly, his bandaged leg stuck out before him awkwardly.

“Carrots?” Miss Esther laid a gentle hand on the cat’s back.

Carrots stirred sleepily and looked up at her.

“Cashew and I are going for a walk. Are you okay until we get back?”

Miss Esther smiled. Carrots was normally so active. He must be catching up on sleep now that he was hurt! 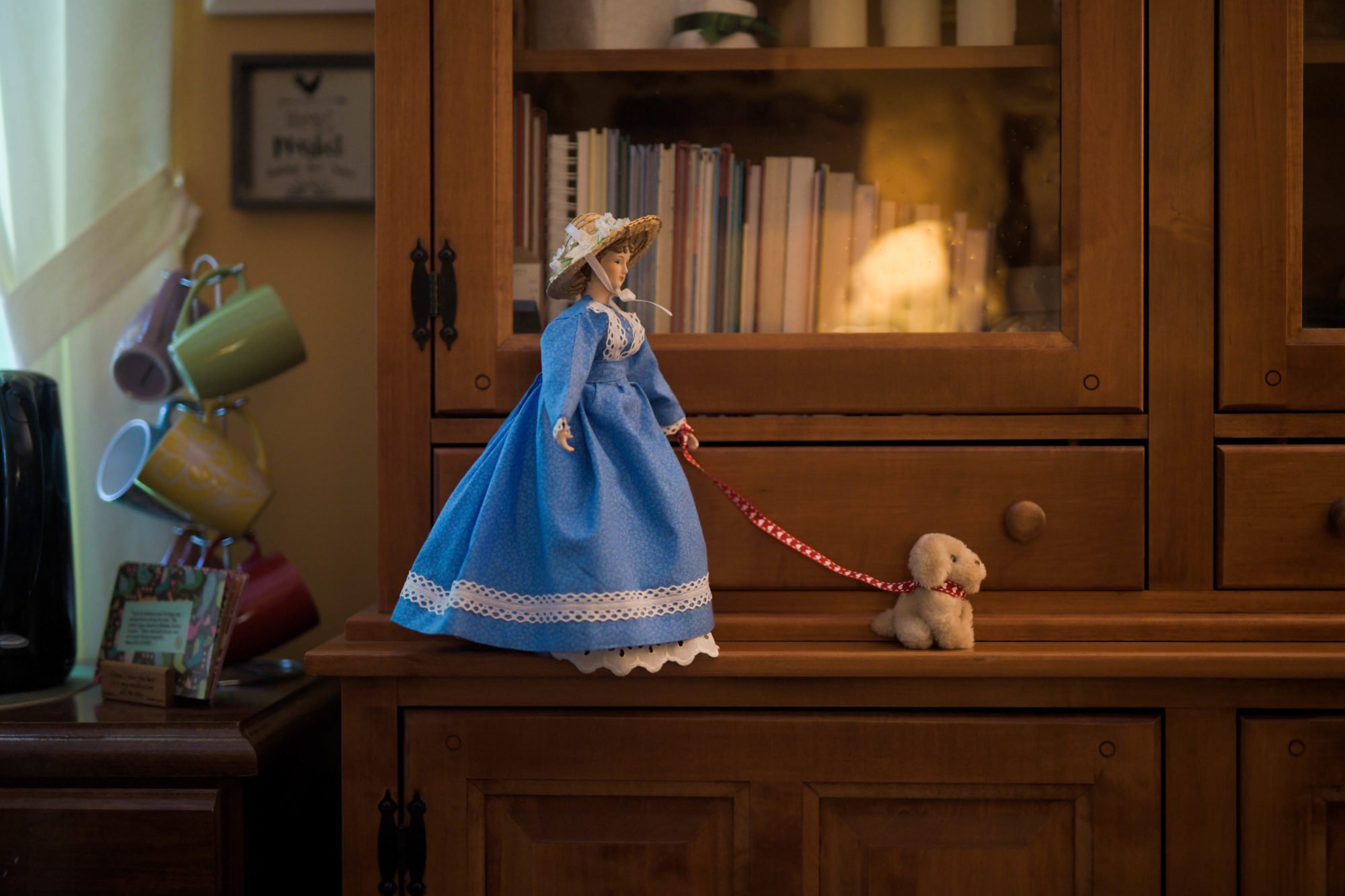 In a few minutes Miss Esther had put on her hat and tied the leash to Cashew’s collar. Together they stepped out into the crisp morning air. Miss Esther locked the door behind them and glanced down the street.

“How about we go down to Bluebell Lawn, Cashew?”

“Whoof!” Cashew started off in that direction.

Miss Esther had to hurry to keep up with him. Past the library, the church, the Bethany Bread House and the dock they went. Miss Esther gave a friendly wave to all she saw but there was no time to talk. Soon they had hurried past the Understanding University and were descending the steps to the Lawn.

Once they reached the large, grassy area, Miss Esther undid Cashew’s leash. Then she took his face in her two hands.

“You will come if I call, Cashew?”

“Okay.” Miss Esther nodded. “You can run around the lawn to your heart’s content.”

Cashew was off in a flash and Miss Esther chuckled. She found a seat on a nearby bench and gave herself permission to take in the view.

“I never would have thought I’d have time for this today!” Miss Esther shook her head. “But it’s so refreshing! Thank You, Lord.”

Miss Esther was watching some tiny birds build a nest in a nearby tree, when a much larger bird circled in for a landing on the lawn. He landed with a quick skip and shook his head as if to get his bearings.

“Good morning, Kingsley!” Miss Esther waved a friendly hand. “How are you today?” 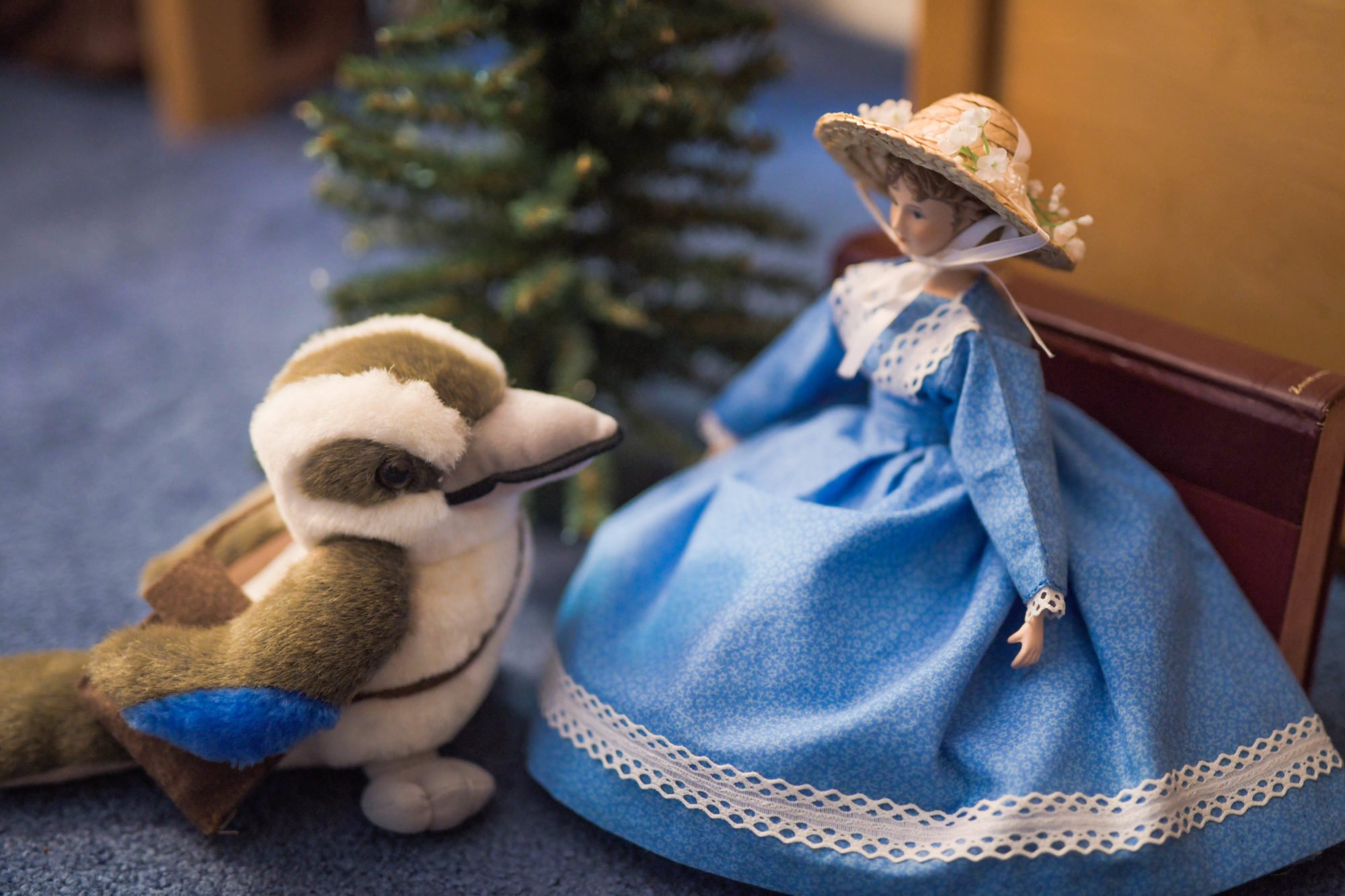 “Miss Esther!” The large bird hopped over. “What a delight to see you! Enjoying this sunshine?”

“Yes. It’s beautiful!” Miss Esther gave her friend a warm smile. “I’m sure it must be lovely up in the air too.”

“Oh it is! It is indeed.” Kingsley reached into the large mailbag he carried. “I do believe I have a few special deliveries for the MaeWell sisters.”

“How splendid! I hope it’s Priscilla’s music.” Miss Esther brushed at a small fly that was buzzing around her face. “She ordered a couple new volumes recently.”

“Ah! Well, I hope so too!” Kingsley’s smile was broad. “Let’s see here…ah ha! A large package for Miss Priscilla MaeWell from the Marvelous Music Company.”

Miss Esther clapped her hands in delight and then reached to take the package. “Priscilla will be thrilled!”

“There’s a small box for Miss Susanna too.” Kingsley pulled another package from his bag. “And a few letters for you, Miss Esther.”

“Thank-you so much.” Miss Esther took the mail and set it beside her.

“One in there is High Priority, Miss Esther. It’s from the castle. You might want to read it right away.” Kingsley tipped his head. “I’m headed there next and I can take an answer back for you.”

“From the castle?” Miss Esther pressed a hand to her heart in surprise. “We’ve never had a letter from the castle.”

“It’s this one.” Kingsley reached in the pile of mail with his long beak and drew out one envelope.

For the first time Miss Esther noticed the gold seal on the envelope.

“Go ahead and open it!” Kingsley nodded to emphasize his point. “Need to catch my wind anyway!”

Kingsley hopped over to the water fountain and Miss Esther broke the seal on her letter. Her heart pounded unusually fast. She’d seen the Grand royal family from a distance but had yet to meet them.

“Oh Lord, for Your wisdom!” Miss Esther was sure her face was flushed. She wasn’t sure if it was from excitement or nervousness.

Perhaps it was both.